Okay, I didn’t see that coming.  Capping a tumultuous first month of 2015, late Friday Esri posted a summary of their new partnership with Google. Though existing customers of Google Maps Engine and Google Earth Enterprise are still no doubt disappointed that change is seemingly being foisted upon them, the offer of free (after one year, maintenance will kick in) Esri replacement software can only be good news as these organizations chart their course forward.  Being given an effective one year free trial with a discounted option to buy thereafter will afford former Google customers a great chance to fully and deeply explore their options with no money down. 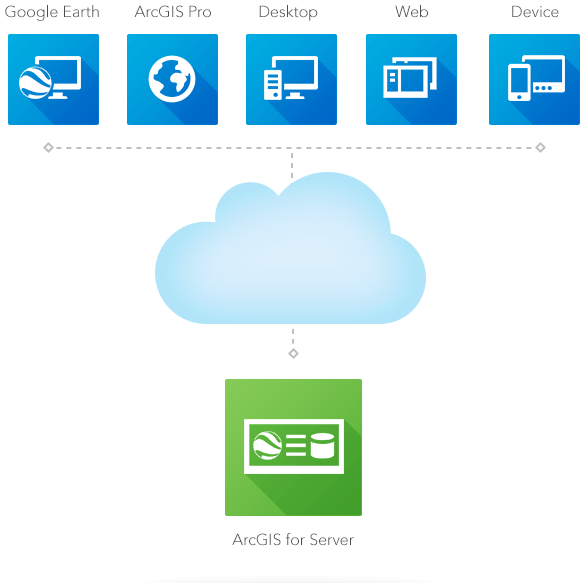 The Esri/Google architecture in the post Google Earth Enterprise World

While we’ve written before about the options for Google Maps Engine customers, this announcement shines the focus on the second, and perhaps more disruptive, part of Google’s change of direction: the implied retirement of Google Earth Enterprise.  The on-premises copy of both data and server software, together with a specially tuned Google Earth client, currently provides a rich behind-the-firewall option for many customers.  These clients would appear to have the fewest options in a potential post-GEE world, so Esri’s offer of similar ArcGIS based software together with a rich dataset is very good news indeed.  Combined with Google’s announcement that Google Earth Pro is now free (for years the licensing arrangement of Google Earth Free Edition prevented many businesses from using it without the Pro upgrade), Esri’s inclusion of Google Earth in its architecture suggests a streamlined migration path for the GEE customers who have Internet access beyond their firewall. And independent of that, Esri’s release earlier this year of powerful 3D capabilities in the ArcGIS Pro App provides another compelling client option.

All of this suggests that Google geospatial customers are in for a year-long stormageddon of change, one that presents a great opportunity to set a technology direction for them for many years to come.  While the decision of what to do next is a weighty and complex one, there is at least one issue that needn’t be a concern. No matter what the choice of replacement system, it must be fed with their own data.  This data is the very jet-fuel that powers the decision making that these systems allow.  And at least getting it wherever it needs to be is straightforward enough.

We’ve already produced a video showing how simple it is to use our FME products to migrate GME data into ArcGIS Online.  But in reality, most data did not begin its life in GME — it started in a the myriad of systems and data models of the host organization and was blended and cleansed before being uploaded to GME.  As well, customers with Google Earth Enterprise almost certainly were preparing data for use in that system by integrating it as well.  So, at least from the data side, adopting whatever replacement technology should mean simply redirecting the output from those Spatial Extract/Transform/Load (ETL) processes to the new system.  And, for the next year anyway, as organizations kick the tires of the Esri offerings, they are certainly welcome to give FME a try as they explore their options.  With our internal usage statistics telling us that more than 50% of all FME transformations end in Esri formats, moving data into the ArcGIS world is a very well trodden path.

I’m confident more details of the new Esri / Google partnership will be revealed in a few days at Esri’s Federal GIS Conference.  We’ll be there too (booth 606).  Stop by and tell us your plans to capitalize on the opportunities all the change of 2015 is presenting.