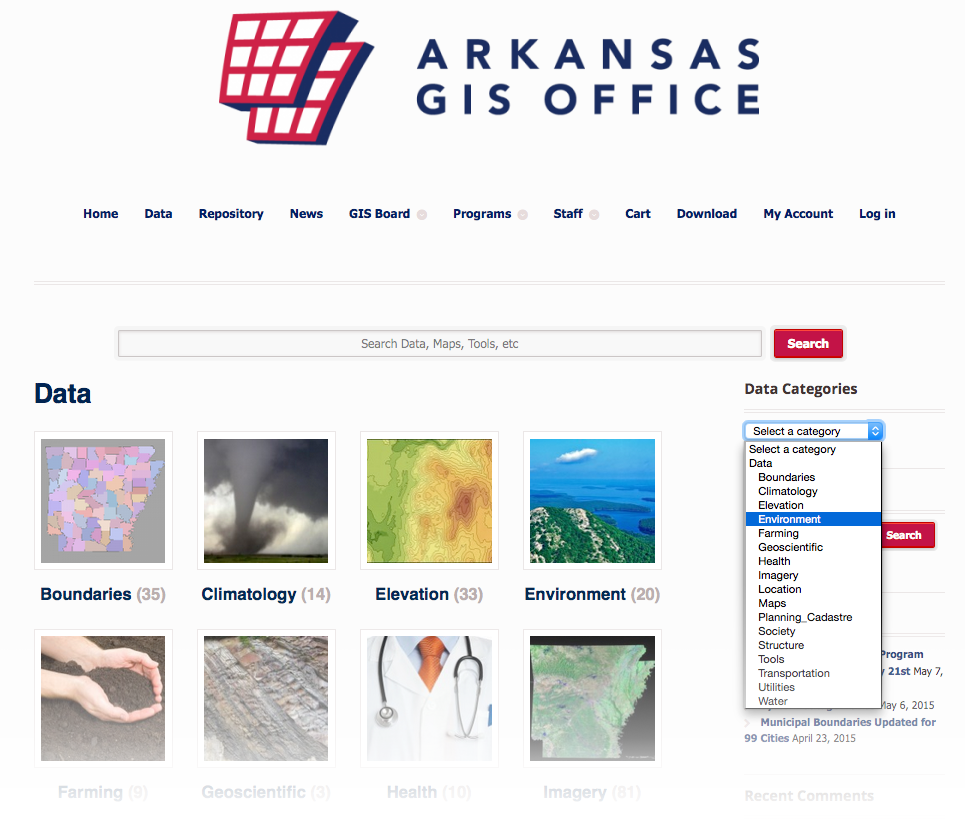 The State of Arkansas has long been a proponent of open data. Back in 2001, we were writing about Geostor, their spatial data portal that even back then was leveraging FME.

Fast-forward 14 years, and the technology has changed dramatically—but their commitment to open data hasn’t. And when it came time recently for a major overhaul, they made the decision to fully embrace the cloud. Good thing we had too!

And so, with FME Cloud at hand, they set out to migrate to a completely cloud-based solution. And the decision would pay off, in big numbers.

Migrating – Getting Your Data to the Cloud

With nearly 2,500 users and around 1,200 downloads per month, Geostor was an on-premises deployment, with the hardware, software, and maintenance demands that entails.

In order to migrate, Arkansas needed to move their data to the cloud.

Their 300 or so vector datasets were handily transferred with FME workspaces, writing to PostGIS on Amazon for access by FME Cloud.

Three terabytes of raster data were moved onto Amazon S3 storage, and an additional four terabytes of historical raster were transferred to AWS Glacier, Amazon’s archival and online backup platform.

This architecture diagram encapsulates the entire new platform. The data is on Amazon, the web server front end is on Amazon, and FME Cloud is on Amazon – and all of them are physically in the same region for optimal performance. 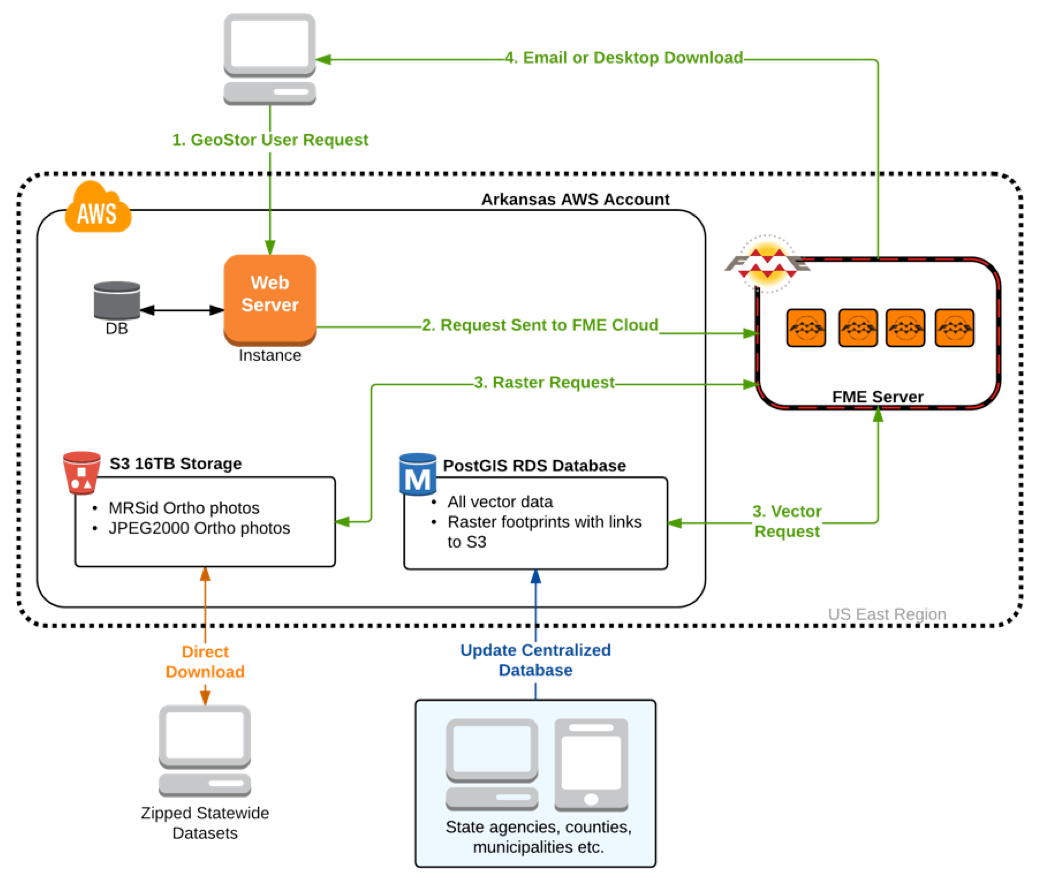 Users requests come in from the Arkansas GIS Office website, and are handed off to FME Cloud. What happens next varies depending on the request type, but a collection of workspaces automatically does things like request vector data from PostGIS and send it off to the user, or grab a set of raster footprints from the database and use that to access the needed rasters on S3.

The entire thing – processes, data, and user interface – is happening in the cloud.

The benefits of moving off-premises and to the cloud tend to be similar for most projects, and Arkansas is no exception. By eliminating in-house infrastructure, they gain access to a level of robustness and security that would be near-impossible to replicate internally.

Stability is a huge factor – fault tolerant data storage at Amazon and FME Cloud’s monitoring remove one set of uncertainties, and the security provided by both is excellent. (You can learn more about FME Cloud security in this whitepaper.)

And in terms of where time and effort is spent, well, now they can focus on tackling data challenges instead of system administration.

So moving to the cloud provided Arkansas with some serious advantages in technology. But what about the cost?

You can see the numbers here, which they have generously shared with us. The math speaks for itself. Their three-year projected cost for in-house was just under $300,000. And in the cloud – just over $80,000.

Some of these numbers are already concrete, and some will be in flux as the project moves forward. But the difference is remarkable, coupling the efficiencies of cloud computing with migrating away from a strategy where the agency had to purchase and maintain a large server platform with physical requirements. Avoiding that hardware cost is a big portion of the early return on investment. 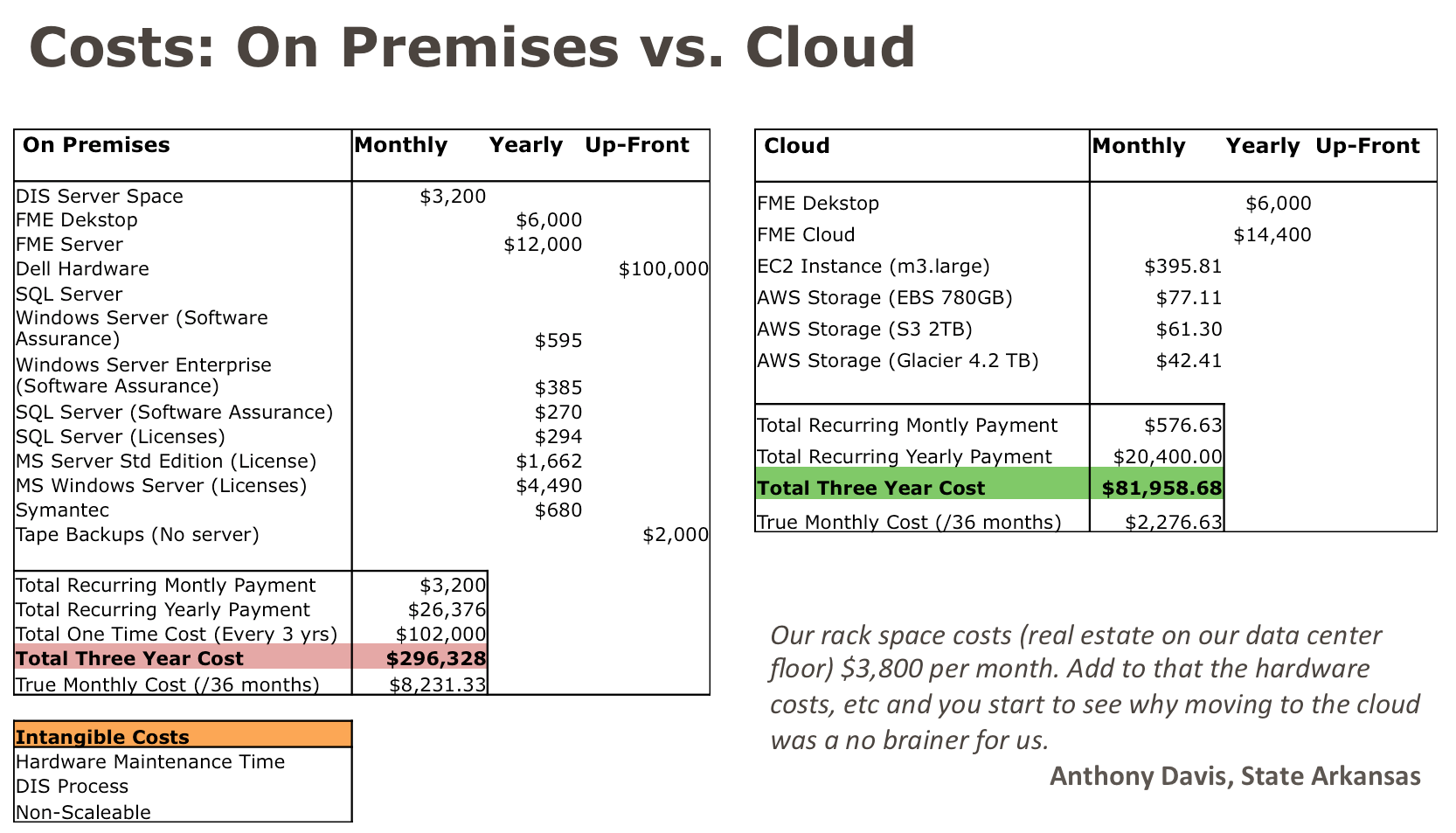 The impact of those savings, though, is perhaps even more important to them. In early 2015, newly elected Arkansas Governor Hutchinson made good on a commitment to cut taxes and improve state government efficiencies. Part of that was a 1% budget cut across state agencies.

That 1% cut was almost immediately covered from operational savings on this project alone – and that meant that the agency wouldn’t be forced to reduce or cut any other services.

The Arkansas GIS Office has created an eminently maintainable and scalable system, without the headaches of internal infrastructure, highly secure and available – and it had a very real economic impact on the agency.

And that’s a huge win all around.

Safe Blog: How to Upload Big Data to the Cloud