Seems like only yesterday I blogged about tween’s being poised to be the next geospatial superusers. Next thing we know, the Danish Geodata Agency has released free 1:1 coverage of the entire country in Minecraft, and the news made the featured article position on BBC’s technology news. Heck even Canada’s CBC picked it up! On the heels of Ordnance Survey’s own Minecraft release, the Norwegian integrated land/sea Minecraft model, and pioneering projects like Blockholm in Sweden, the signs are pointing to the convergence of geospatial and gaming as more than just a passing fancy. 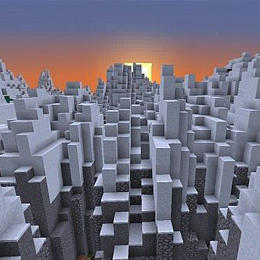 Ulf Månsson, Certified FME Professional at Sweco has been watching this space closely since his early experiments with FME and Minecraft generation, eventually leading to his involvement in creating Blockholm – a collaborative experiment in combining gaming with geospatial in an urban planning context, sponsored by the Swedish Centre for Architecture and Design. In just two months, over 10,000 participants from all over the world interacted with this virtual version of Stockholm, where you can sign up for a plot of land and build to your heart’s content.

“These geospatial-Minecraft initiatives clearly show that we have a new geospatial system and a new geospatial format,” says Ulf. “So it’s quite natural that we enter phase two – meaning professional integration of gaming data in the geospatial jungle of workflows. Now all these wonderful Minecraft worlds are released. Millions of users are producing and modifying data in a crowdsourcing way. The real power and potential of this lies in the ability to harvest this data. For instance the Blockholm solution was built on a PostGIS database and an FME Server backbone. The database is really linked to the Minecraft world making it possible to extract what really was built and where.”

Enthusiasm over where this all could go is popping up on this side of the pond too, where graduate student Paul Bailey at the University of Colorado is conducting a study entitled “Casual Users Leveraging LAS Data”. With the assistance of both an FME Grant Program license and some Sweco Minecraft expertise, he’s moving LAS LiDAR data into Minecraft for his local area, and then putting it into the virtual hands of local kids, connecting the real and virtual worlds to study the results.

Paul says, “I hope to engage students to look at the world and further envision where they are and how the built, landscaped, and natural environment interact.  A combination between the real and imaginary worlds.  They may be able to make generalized mass models of the neighborhood in which they live, and perhaps discover things that are both good and bad. Minecraft may be a tool to communicate their observations and suggestions.”

Kids seem to crop up in any conversation about Minecraft – whether as inspiration for older Geonerds (Ulf’s phrase!) or as our future. As Ulf observes, there are lessons to be learned from games. “The Gaming industry lives by producing entertaining products. They engage many millions of players by a fun user interface and fun experience. So the lesson here is really: You want more users to your geospatial data and systems? Make it a fun experience.”

Paul was inspired by kids too, and is looking at the next generation. “I am sure spatial awareness stimulated by gaming in an environment where building is a part will help many kids towards STEM education,” he says. “It made sense to do a project where real world measurements could be a starting point for play and could result in useful products beyond learning.”

Have you jumped on the Minecraft train yet? Thinking about it? Or just a little intrigued? Ulf will be presenting a plenary session “Crowdsourcing Through Gaming – FME and Minecraft” at the upcoming FME International User Conference 2014 in Vancouver, June 10th to 13th. And with a bit of luck (and hard work), we’ll have a few surprises of our own… Hope you can join us there!