This post will walk through how to stream geotagged tweets onto a Google Map using Node.js. The end result is a real-time heat map depicting where in the world people are tweeting from. 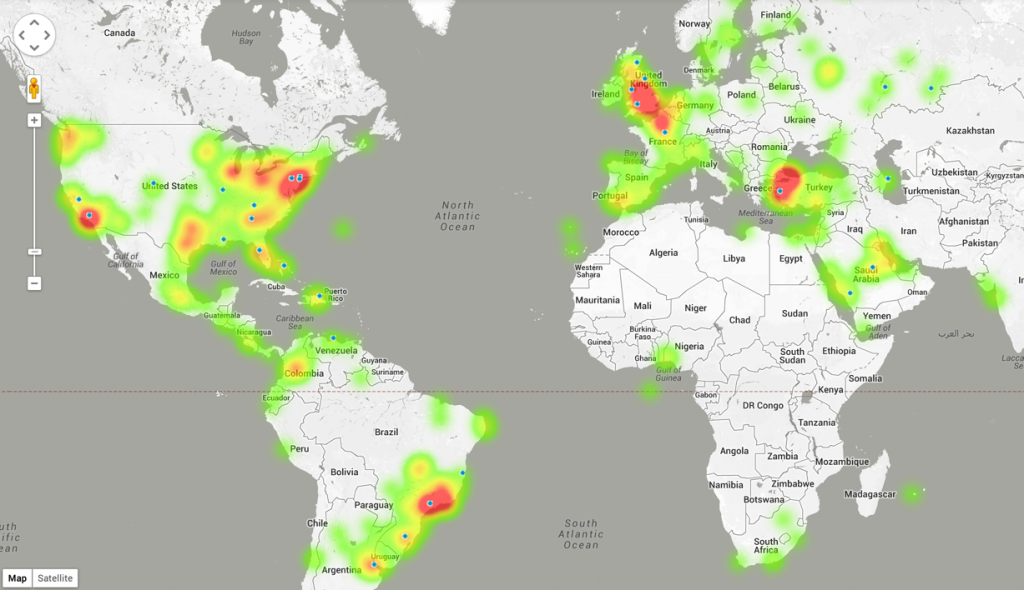 The application can be downloaded in full from Github. It has two main parts: the server-side code running on Node.js, and the client-side code running in the browser. The server requests the Tweets from Twitter, parses them and then streams them out via WebSockets to anyone with the web page open. Before we start:

Two files power the server side: package.json and server.js.

Package.json holds a variety of metadata related to the project and lists dependencies.

Server.js is where all of the logic lies. This code first sets up a web server using express, which serves the static web pages, loads socket.io the web socket module, and loads the Twitter API module.

To use the API, you must create an application on Twitter. It’s free and it doesn’t take long. Once you have created your application, load it from the dashboard and then click on API keys tab at the top. The values in the web interface correspond with the following in the JSON:

After that, the interesting part starts:

Let’s walk through the steps.

The webpages are all served from the public folder. The index.html file loads the relevant js libraries and then there is a tag for the Google Map. The twitterStream.js is where the logic lies.

This sets up the Google Map then opens up a websocket connection with the server. Once the server confirms it has received the connection and is ready to start sending Tweets, the connected listener is called and the client sends a message back to the server to say it is ready via socket.emit(“start tweets”);. The server responds with a stream of Tweets captured in the twitter-stream listener, where they are added to an array bound to a Google Maps heat layer.

First we need to install the dependencies (defined in package.json). From the terminal, cd to the project directory you downloaded so you are in the same folder as server.js. Then do:

To run the server, do:

You should then be able to open a browser and access http://localhost:8081.

How do we take this further? It would be great to dig deeper into the incoming data and rather than just visualizing the data explore trends and gain intelligence. I also wonder what happens if we want to mashup different data sources and read data from other web services or lower-level protocols, such as TCP/IP or WebSockets.

Things get very complicated very quickly when writing code. Here at Safe Software, we don’t think you should have to worry about server-side code to solve your problems—that’s our worry. Here is exactly the same example as above without writing one line of server-side code. All of the workflows and logic are built in a graphical user interface and can then be turned into services and hosted on our cloud platform.

Want to learn more? Watch our free webinar on How to Intelligently Process and Deliver Real-Time Data with FME Server.

We’re here to help you create harmony between your data and applications. We have lots to help ensure your trial is a success including weekly webinars, free training, and full support even during trials.