Trains are just simply cool. Growing up in rural Canada, a train passing was an event—we’d race it on horseback and whoop as it left us behind, headed for twisty high mountain passes in the Rockies en route to the ocean. A few years back, when I had a work-related opportunity to install some fancy gear and ride along on a hi-rail for a day, I turned right back into a twelve-year-old, my freshly purchased hard hat and safety boots accessorized with an ear-to-ear grin.

And so it was, I must admit, with a tiny little bit of envy that I picked up the phone to talk to Yves St-Julien, GIS Applications Designer at CN Rail, about how he’s putting FME and FME Server to work on the rails. Yves has been working with FME since 2003, and at CN, he and FME are helping deliver automated, real-time or event-driven solutions to almost every single group and practice. Our conversation covered so many varied applications that this article has turned into a series – and today, we’ll take a look at how FME and LiDAR are contributing to keeping the stock rolling.

Positive Train Control is a safety-driven mandate that is generating a great deal of precision mapping requirements for the railroads. CN is taking advantage of the detail that LiDAR can bring into the mix, starting with extracting track centerlines. Initial attempts were providing 300-foot precision – nowhere near the accuracy required. So they went back, using FME to read the raw data, and generated surfaces and rasters to be interpreted in AutoCAD® Map 3D. In this way, they captured the centerlines right over the surfaces and captured elevation as well, and were able to provide precision data to the PTC group, using FME to read out from the internal Oracle database to a file geodatabase – and the PTC group uses FME too, for loading back into their systems.

Yves’ group also wants to extract assets along the rail such as signals and signs. The equipment is visible in the point cloud, and they are now exploring ways to add automation and recognition of equipment type to the process, with the addition of aerial imagery. The ultimate goal is 4-inch target accuracy along the main lines.

Once the tracks have been isolated from the point cloud, the data is further processed. A secondary point cloud – of just the tracks themselves – is isolated, and that is sent to their AutoCAD® Map 3D enterprise GIS, for generation of alignments, corridors, slope analysis, and more. These steps had been done in Civil 3D as very small tile sizes, and without the ability to batch process for time savings. By adding FME here, they were able to process 103 miles of track in Baton Rouge, Louisiana in minutes – where the conventional method would have been a month of processing turnaround. 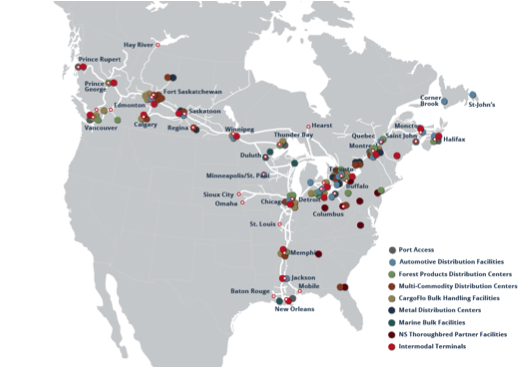 With the increasing data demands of the PTC mandate, they are hoping to acquire their own set of hi-rail mounted mobile LiDAR units to be able to head out and map on-demand. And as FME has proved its worth through the proof of concept stage, the go-forward plan to accurately map all of CN’s 20,000-plus miles of track across North America will include it. PTC requires very strict accuracy conditions, and CN’s engineering groups around North America must freshly as-built all of it.

PTC is on track for compliance by 2015, so there is much work to be done between now and then. We’re pleased that FME can contribute so greatly to CN’s efforts, and making the railways safer too.