Joe at Directions recently asked (and answered) if Cloud Computing is a Disruptive Technology for Geospatial – the post and the comments are well worth reading. As Don has written previously, we’ve been working for some time to see FME Server up in the cloud. At the end of his lightning talk at our recent FME User Conference, Paul Bissett of WeoGeo showed the results of applying their scaling technology to FME Server in a Bing Maps raster tiling exercise – the results are very impressive.

In particular, Peter Barnes’ comment on the Directions article was right on the mark – geospatial is well positioned to take advantage of the elasticity and power that the cloud provides because the data volumes we tend to deal with are very large, the computation typically significant, and the two growing rapidly in size and scope due to the proliferation of increasingly accurate sensors and the demand for geospatial answers in a wide variety of important application areas. But one very interesting point Peter makes is that “For geospatial apps this elasticity offers a significant jump in speed at a small incremental cost (it’s generally cheaper to have your own kit for base load).” Some of my cool friends have called this approach “cloudbursting”, and indeed we’ve had some enquiries from customers about deploying FME Server in precisely this way (though to my knowledge it hasn’t been done yet). It seems like having a baseline level of support, maintained inhouse, with the ability to scale and overflow to the cloud as needs demand and shrink back down to baseline as they retreat, will become a sought after deployment model. And perhaps that might unleash some serious disruption, as geospatial problems, systems, and services previously too large to build the infrastructure for, can become routinely tackled and solved at a fraction of the previous cost.

Hold on, and bring your umbrella. 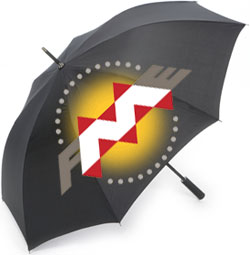 Buy a cloudbursting FME Server, get a free umbrella!