Upon asking myself “what is the difference between a geodatabase and geospatial database?”, and then disappointingly finding no obvious answers online for something that seemed like a simple question, I decided to write this, with the noble intention of saving someone else a little bit of grief and Googling time (and we can now say there are TWO of us who have asked this question!).

While this may seem like a simple question, the answer is less simple than I would have liked (probably why no one wrote about this previously). Plus, I’ll fully admit that getting started in the spatial industry is like learning a new language. Between acronyms, synonyms, colloquialism, and any other -ym or -ism you want to add, I still find myself questioning, “do I get this now?” (don’t worry, smart people fact-checked me – the following writing is factually accurate).

So, join me on this short journey, where we set out to define what a geodatabase is and compare and contrast it with a geospatial database, for glory and the greater good of the internet, and those of us who are just trying our best to learn.

The Origins and History of the Geodatabase

If someone says “geodatabase” and you automatically think Esri, you’ve got half of the definition down.

In the 1999 release of ArcGIS 8.0 (Esri’s core product), geodatabases made their market debut, launched with the intention of creating a “simple geometry storage model” for Esri users. The name geodatabase, is a shortened version of the term ‘geographic database’, presumably because geodatabase just rolls off the tongue a lot better (this author, for one, appreciates typing fewer characters).

With a definition based on the component of its name, you can infer that geodatabases probably deal with geographic or spatial data, and have some kind of database component – a structure for storing, organizing and accessing data. By Esri’s current definition, a geodatabase is “a collection of geographic datasets of various types held in a common file system folder”.

Put into my own words, the simplest definition that I could come up with is:

What Makes a Geodatabase Database-Like Anyways?

Before breaking things down, let’s cover what a geodatabase looks like on your computer versus in Esri’s ArcGIS. On your computer, a geodatabase will be a singular folder with the extension .gdb. If you try to look at the elements in this folder in your computer’s native file browser, they aren’t really human-readable.

A .gdb folder existing on a user’s computer. This shows some of the content of the file once expanded.

But, when you open up this folder in ArcGIS or a compatible database system, a geodatabase will have more accessible content. You’ll find the contents are multiple spatial datasets and corresponding information on how they relate to each other and should be organized. Storing multiple items together makes it easy to access, share, and query multiple related spatial datasets.

Geodatabases do all of the above, but also:

Let’s cover the pieces actually making up the geodatabase puzzle. Each dataset stored within a geodatabase is stored as a table. Geodatabase tables are made up of rows of data defined by columns, and store information as numbers, text, dates, BLOBs (binary large objects), or global identifiers (a unique ID to a feature or row). These tables can have relationships to each other, thus giving them database-like capabilities.

Though there are many types of datasets that are geodatabase-compatible, these are some of the typical datasets you can expect to find in a geodatabase: 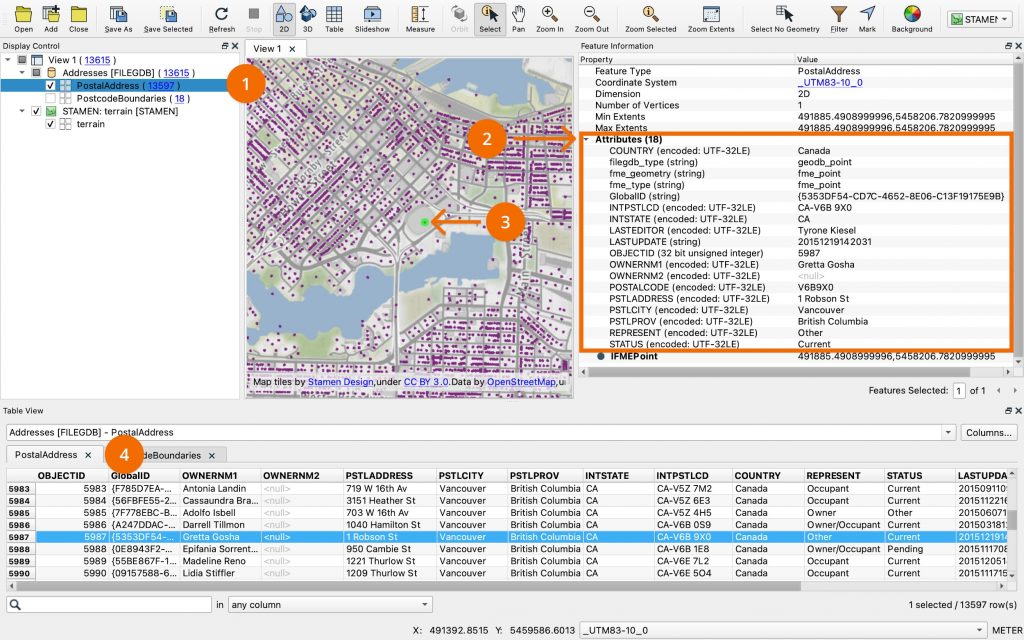 Addresses.gdb open in FME showing the qualities of the feature class PostalAddress. 1) Feature Class 2) Attributes of selected feature 3) Feature (a point) that has been selected 4) the PostalAddress table storing attributes, also showing the point selected.

Where is a Geodatabase Stored?

Geodatabases are stored in one of two ways:

The storage method selected depends on the kind of geodatabase being used (see table below).

Geodatabase is Esri’s proprietary file system folder for storing and managing geographic datasets – which are held in tables about feature classes or raster datasets and stored on a user’s machine or within a relational database.

What Kinds of Geodatabases Are There?

Here’s a comparison table of the current geodatabase types that exist and some of their qualities.

What Then, is a Geospatial Database?

A geospatial database is miles easier to define (hahaha, spatial pun. Yeah, I know I’m the only one laughing). Here’s a quick test to determine if what you are using is a spatial database:

If you answered yes to both of these questions, then great, you’ve identified a geospatial database!

A geospatial database is just a standard database that has been extended to support spatial data. To do this, a database adds the ability for:

The term “standard database” itself is also a huge generalization. Databases exist in different flavours – we already mentioned relational databases above, but you may have also heard of something like NoSQL or graph databases or any number of others. I won’t get into defining those here but it’s important to understand that regardless of the base flavour, the above list of things that a standard database must do to support spatial data still applies.

The definition: A geospatial database is a database capable of storing, querying, and indexing spatial data in an efficient manner.

Is There a Difference Between a Geospatial Database and a Standard Database?

Yes, there is — though they are the same at the core.

Now, just to be clear, geodatabases can be stored in a geospatial database.

What’s the Difference Between a Geodatabase and a Geospatial Database?

Why Use One Over the Other?

If you look at the pros and cons above, it really comes down to how you answer:

At the end of the day, as long as you understand the differences, it’s a personal choice of what makes the most sense to your business or situation. Kind of like how choosing a coordinate system for your data is more about the greater goal, and there’s no guarantee right or wrong choice.

If you’re not set on using one or the other, or know you’re inevitably going to have to make use of both, tools like FME can help you integrate various types of spatial data with geodatabases or geospatial databases. While migrating data can be a costly annoyance, it’s always an option if you feel the need to switch, and FME can help you do this with ease. 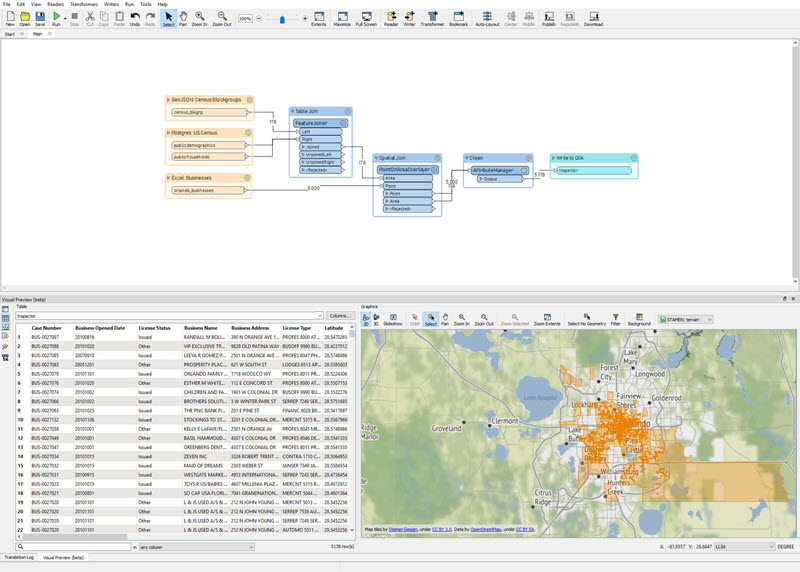 Create workflows to convert and transform your data in a drag and drop interface with FME. No coding required!

You’re even able to automate the process to ensure all your spatial data (and any other kind of data for that matter) is where it needs to be when you need it.

That was a lot, I know, I wrote it. But now that you’ve hit the end of the page, hopefully the information void of knowing the difference between geodatabases and geospatial databases has been filled, and you’re confident in the following definitions:

If you want to learn more, I recommend the following resources to check out next:

3 Responses to “Geodatabase vs. Geospatial Database: What’s the Difference?”