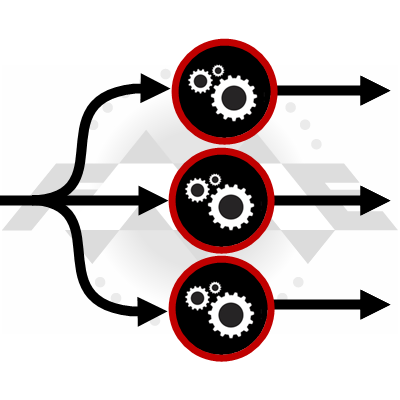 Parallel Processing can be a big deal in terms of performance. Modern computers have multiple cores and spreading processes over these cores makes the most of the available computing power.

FME takes advantage through parameters that define multiple processes. Plus transformers that parallel process also have an “Input Ordered” parameter, which is another performance-enhancing tool.

Except… we saw support cases and test results that suggested we ought to redesign the parallel processing setup; so for FME 2019 that’s exactly what we did!

How Parallel Processing Changed in 2019

In brief, we removed the parallel processing option from all individual transformers in FME 2019: 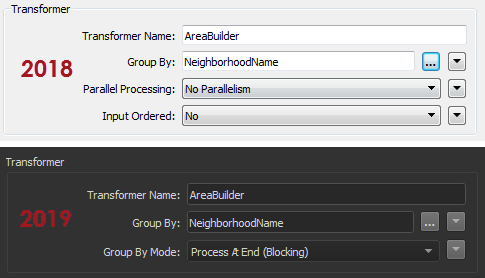 Notice there is no Parallel Processing parameter (plus Input Ordered is now Group By Mode). But don’t worry! Parallel processing is still available. Only now it’s available solely as an option on custom transformers.

If you’re not that interested in why we made the change, then skip forward to “FME 2019 and Parallel Processing” below.

But if you want to know the reasons, carry on reading…

The Problems with Parallel Processing

In short, with FME2018 we felt there was more chance that a user would slow their workspace down, rather than speed it up. There are a few reasons for this…

In design terms, the complexity of parallel processing is compounded by the prominence of its parameters. We belatedly realized that the functionality should not appear at the top of each transformer dialog! It’s confusing and it doesn’t relate to the core purpose of a transformer. 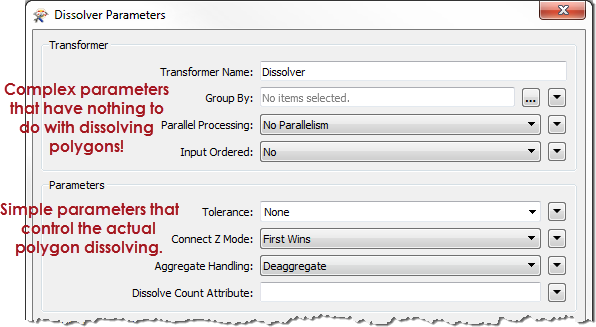 Imagine if the biggest buttons on your TV remote were for fine-tuning picture color! So that’s one reason to move parallel processing to somewhere less obvious. The mix of complexity and prominence encouraged incorrect use of parallel processing. The most common mistake was the number of processes…

As you might know, there is an overhead to starting and stopping FME processes. There’s also an overhead in passing data from one process to another. So excess processes slow the translation. The ideal scenario is to have fewer processes, working on more features. When there are lots of small jobs, the extra overhead is greater than the gain from parallel processing. The overall translation is slower, rather than quicker.

Take this example workspace in FME2018:

Let’s start by busting a myth. You might think that because all three transformers are set to parallel process data, that they might all start up multiple processes simultaneously, bringing the computer to its knees. That’s not the case. The Dissolver doesn’t start any processes until all of the AreaBuilder processes are complete. So the number of processes won’t spiral out of control.

However, all three transformers group by the same attribute!

As I’ll demonstrate later, if the author had made this into a custom transformer and applied parallel processing, then there would be fewer processes. So, that’s another reason for our change. The new design encourages the right behaviour so it’s more likely an author will do the right thing, even if they aren’t aware of it!

An added benefit of parallel processing with a custom transformer, is that it parallelizes all transformers, whether or not they are group-based. As an example, let’s put a Tester transformer into the previous example:

If this were created in a custom transformer, then parallel processing also applies to the Tester, and that makes it more efficient.

The Input Ordered parameter is interesting because it was tied directly to parallel processing, both in our code and by virtue of being adjacent in the parameters dialog:

Because it’s in the same block of parameters, it looks like it must be related. In fact it isn’t. At least, it’s related in that they are both performance-related; but there’s no reason your data has to be ordered to use parallel processing, or that ordered data must be processed in parallel.

So we decoupled these two parameters to reduce the confusion, and to prevent users applying them in error. In particular, the Input Ordered parameter also controls what is processed in a group, so it’s especially important to not misuse it. It also got renamed and new option names to make it clearer what it is for:

So that’s why we made those changes. Now let’s see what parallel processing looks like in FME 2019…

Obviously there are no Parallel Processing options any longer. So, I convert this into a custom transformer and set parallel processing in its parameters: 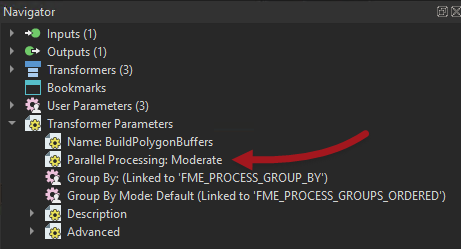 Now when the workspace runs, there is a separate process per group. But, importantly, each process covers all three of the transformers, so there are fewer processes starting.

Additionally, if we add an extra transformer – like this Tester…

…it too runs in parallel, which is an added bonus.

Of course, you don’t need to be very observant to notice that NeighborhoodName appears twice in the transformer dialog:

Recall that FME publishes all attributes used in a Custom Transformer automatically. This lets the transformer be used in multiple places, where (in this example) “NeighborhoodName” might not be available. So FME automatically made the first of these published parameters when the custom transformer was created, and the second when parallel processing was activated.

Here I’m going to remove the parameter created with the custom transformer.

So first I unset the Group-By parameter in each individual transformer. Then I remove the user parameter; not by deleting the parameter itself, but by unchecking that attribute from the Input port: 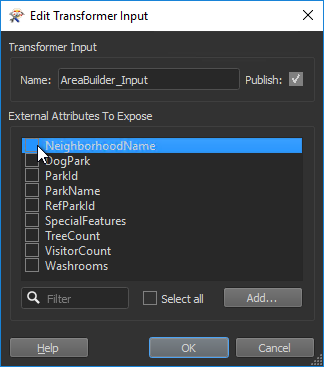 This hides the attribute and – it no longer being necessary – also removes the published parameter automatically.

If I do remove an attribute reference this way, then I should definitely check the custom transformer to see if any parameter became flagged as incomplete (turned red). This would indicate that I’d used the attribute somewhere I hadn’t yet dealt with.

In short, the important issue here is performance. Workspace authors always look to gain a performance advantage and using parallel processing is an obvious method to do that. Unfortunately, it was a little too obvious. We felt that new users could – in attempting to speed up their translations – actually slow them down. 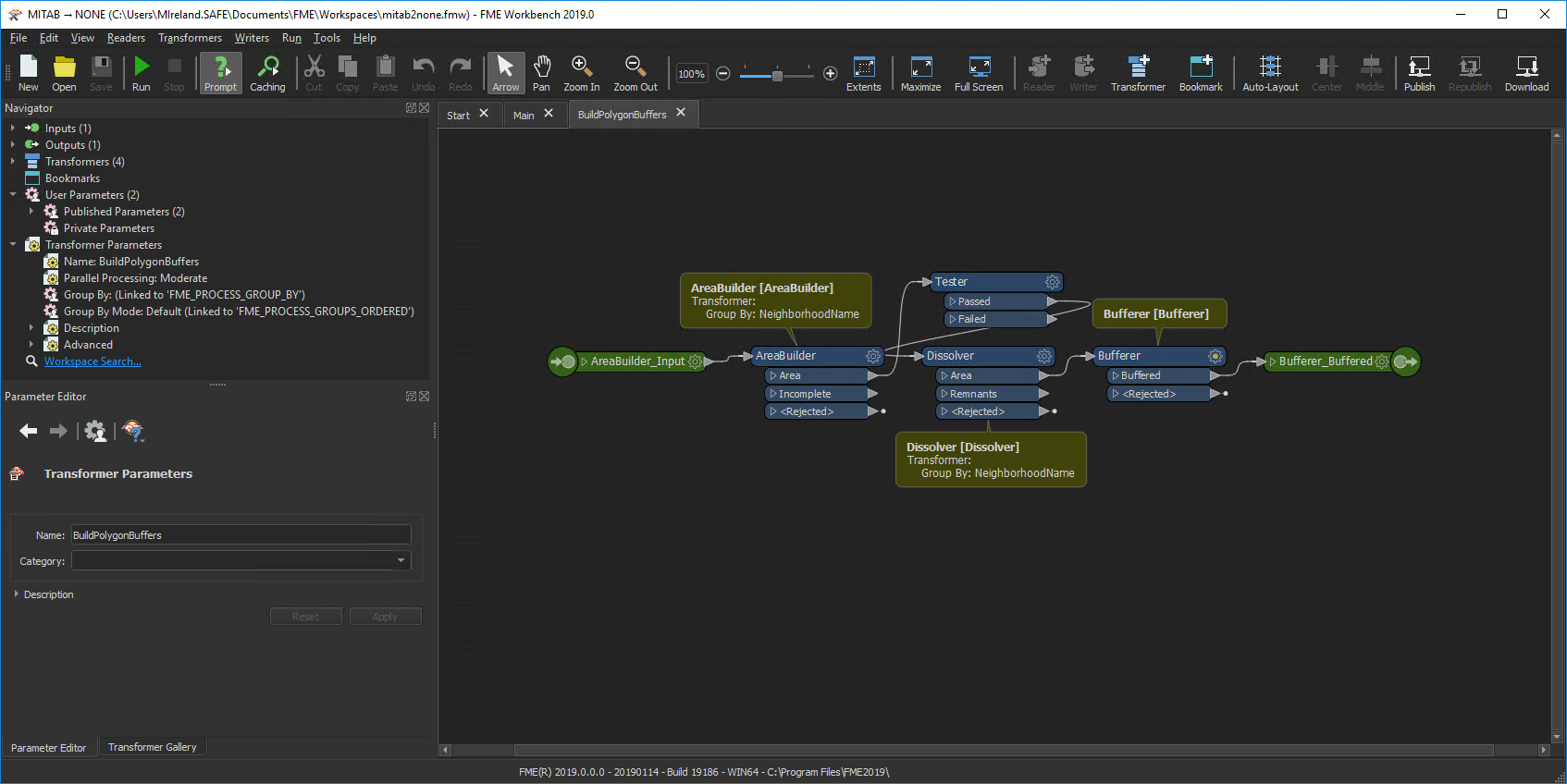 That’s why we moved the parallel processing parameter to a place where it’s naturally better performing.

Incidentally, you probably noticed the above screenshots of FME 2019 are in “dark mode”. That’s just one of the other useful updates we hope you’ll enjoy in this upcoming release.

5 Responses to “Parallel Processing and FME: A Redesign for 2019”