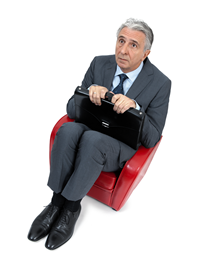 Inner Join? Is that the opposite of an Outer Join?

When I was interviewed for a job with the team at Safe Software, one question asked was “Do you know the difference between a left join and an inner join?”

Although I’d used SQL and joins quite a lot before, I couldn’t remember the exact definition and mumbled an answer. I was hired, so the response must have been more convincing than I thought. Either that or they really liked my joke about the cinnamon buns.

The thing is, because I’ve had access to FME, I’ve rarely since needed to do SQL joins; so my knowledge of left and inner joins has remained a bit sketchy… until today!

Because today is when I started to try out the latest transformer to hit the Filters and Joins category: The FeatureJoiner.

So the FeatureJoiner is a transformer that joins data together. It most closely resembles the FeatureMerger (which it may eventually replace). Here it is on the canvas:

This workspace joins Facility features with PostalAddress records. You can see that instead of Requestor/Supplier the transformer has Left/Right ports, and one fewer output port; but otherwise it really does look like the FeatureMerger.

However, a look at the parameters dialog shows a lot more differences: 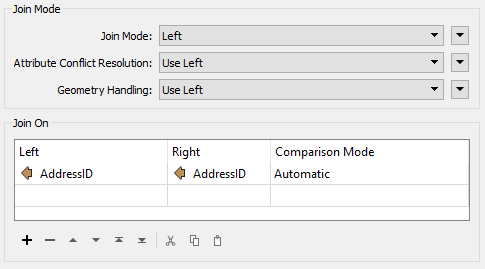 The Join On, Conflict Resolution, and Geometry Handling parameters are fairly obvious, and are similar to those that already exist in the FeatureMerger. But the key parameter is Join Mode…

The Join Mode is where it becomes necessary to know about Left Joins and Inner Joins. That’s because the three modes are Left Join, Inner Join, and Full Join.

For our training materials I made up a table that shows what these modes do:

The simplest way to understand the operation is this: the overlapping part in each diagram is always output. It’s a join so the features are output through the Joined port.

The Left/Inner/Full parameter controls not the joined features, but the features that aren’t joined.

So, remember our Facility/Address example, which matches Facility features to Address records:

But in Left mode, all facilities exit the Joined port, whether they have a match or not. It’s not so good for data QA, but it’s fine if we know not every facility has a matching address.

In Full mode, the Joined output would include ALL addresses, used or not. It’s probably not needed in this case, but it is useful in other scenarios.

Now, you may have noticed that the FeatureJoiner has no equivalent to the FeatureMerger “handle duplicate suppliers” parameter. To understand that you need to understand what we mean by a “match”…

To understand this, let’s take a look at this with some feature count numbers included:

How many features will exit the Joined port? Well, it depends.

If we assume a strict 1:1 match between each Facility and an Address, then 8 features will exit as Joined. Why? Because we have 8 matches. The count will be thus:

So that’s good. However, we might not have such a clean 1:1 match between Facility and Address table. We could have 1:M, M:1, or even M:M.

Let’s say each Facility has two matches in the Address table. Then we get this:

Why are we getting more features out than we put into the Left port? Because we are getting one feature per match, and there are 16 matches!

This is not something the FeatureMerger would do. It would either ignore the second match or create a list. But this is designed to be a SQL equivalent, and so it works differently. In fact – in an extreme case – if we assumed that every Facility has AddressID=1, and every Address has AddressID=1, then every facility would match to every address!

To put it another way, in Left or Inner mode we could put in 8 “requestor” features and get out 11,707,536. It’s not wrong, just perhaps different than what you’re used to.

As a bit of an advanced topic, matches exit the the transformer in the same order as the features enter the Left port.

So if the Left features are sorted in a particular order when they enter the transformer, that order is unchanged in the output, for either a Left or Inner join.

If you want to retain the input order for a Full join, then both the Left and Right inputs must be already sorted in order.

So which transformer should you be using? Well there are two aspects to consider: functionality and performance.

For functionality the FeatureJoiner is certainly nicer for users used to database terminology and functionality. It’s designed to mimic SQL so the results should be the same as if you’d entered the same SQL join commands.

The key output difference is the one-feature-per-match concept of the FeatureJoiner. The FeatureMerger would let you create a list instead. But I’d say that a lot of the time you immediately use a ListExploder to break the list up into features anyway, so I’m not sure how much disadvantage it is to not have a List parameter in the FeatureJoiner.

Plus, if you really need a list, follow up with a ListBuilder grouping by your join keys.  This is where output order is important, as you might be able to set Input Ordered by Group in the ListBuilder, if the FeatureJoiner input was suitably sorted.

As for performance, the FeatureJoiner boasts an improved design, and gets an added boost by using the “Feature Table” technology that speeds up so many other readers, writers, and transformers. So if performance is important then you should definitely try out the FeatureJoiner.

You may be more comfortable sticking with the familiar FeatureMerger at first, but it’s worth going out of your comfort zone to at least try the FeatureJoiner.

You might even learn some terminology to help land your dream job!

As an example of the improved performance, check out the video of the FME 2018 unveiling:

Incidentally, notice in the video that their transformer’s name is the Joiner. We’ve since changed it to FeatureJoiner, to be less confusing (given that there used to be a Joiner, which is now the DatabaseJoiner). I believe Joiner is still an alias for the DatabaseJoiner, but “DJ” or “FJ” in Quick Add bring up these transformers quicker anyway!

NB: If you are looking for a job(!) follow FMEJobs on Twitter, or check out the Safe Software careers page – and don’t forget to brush up on joins before your interview!

5 Responses to “How to Join Data with FME and (Maybe) Land Your Dream Job!”