Part 1 : Earlier this year we announced the technology preview of FME Server for Docker. Part one described what it is and the benefits of a Docker-based FME Server deployment.

The first announcement of Docker for Mac was both unexpected and very exciting as it promised to enabled Docker containers to run “natively” on the Mac. I have “natively” in quotation marks as containers are not really run native but the whizzes at Docker pulled off some amazing magic to create a native container feel thus making the Mac a great Docker host. Instead of using VirtualBox or another heavy virtual machine, Docker for Mac uses the lightweight xhyve virtualization technology to host the Linux version of FME Server.

With Docker’s announcement that Docker for Mac is now production ready, we wanted to share our excitement of this technology so you too know how easy it is to now run FME Server on a Mac.

Using Docker for Mac it is now simple and takes only a few minutes. See the video below which outlines the entire installation and licensing process for getting FME Server running.

Before Docker for Mac

Previously using Docker on the Mac required running a complete virtualization environment such as VirtualBox or VMWare. While this did allow FME Server to run on the Mac for the first time, I couldn’t imagine anyone using this as a real world deployment option. It never felt native as FME Server was running inside Docker containers, which themselves were running inside a virtual machine.

Despite these limitations of life before ‘Docker for Mac’ we found it useful and came to love using Docker on our Macs. For the first time we could install and run both FME Desktop and FME Server on our Mac laptop. It felt good.

With Docker for Mac, FME Server on Mac is easier and better than ever before. Not only does it have the benefits of Docker as it relates to security, stability, resource sharing, and more (discussed in previous post on Docker), it also gives you a native FME Server experience.

So go ahead and give FME Server for Docker a try using Docker for Mac. If you’re a PC user running Windows 10 and want to try our Docker deployment, give Docker for Windows a shot too! (Of course you can always run FME Server natively on Windows as well.)

In addition to the video, we also have an installation guide and a list of handy Docker commands. 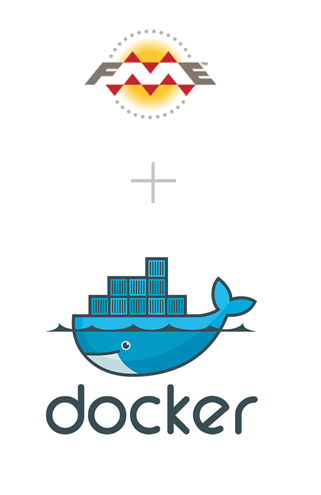 What is next for FME and Docker?

Our excitement with Docker continues to grow. Docker promises to change the way that we deploy FME technology, with FME Server being the first target.

Docker 1.12 contains other great features that we’re busy experimenting with. Soon we will share some of these experimental FME deployments so you can experiment with them too.

Hint: Swarm of FME engines anyone?

Are you a Docker Fan?

Please give us feedback on what you like and what you would like us to do next. Already, Mano Marks has commented on ideas for how we can streamline the installation process even more.

If you too have any thoughts on FME and Docker please let us know. It would be great to hear from you. The team here thrives on this kind of brainstorming.