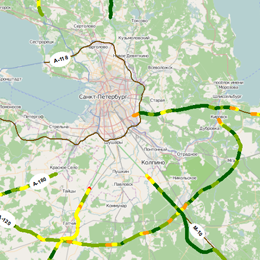 Speed limits are mapped from LRS measures, but the kilometer posts provide a few challenges to overcome.

FME is key to live data monitoring of a nation’s worth of highways – and to preparing the spatial data it relies on. But unpredictable kilometer post locations make managing the linear referencing system a bit more of a challenge than usual.

Auspiciously placed where the Neva River meets the Baltic Sea, Saint Petersburg is not only a UNESCO World Heritage Site – it’s a major transportation hub connecting people and cargo from its port to the railways and major highway network that service Russia. It’s also the home of FME aficionado Alexander Tarakanov of Integration Solutions Center – who is putting FME Server to work to help manage some 48,000 kilometers of Federal highways.

Dmitri Bagh, Safe’s resident FME Scenario Creation and Testing Analyst, recently had a chance to visit with Alexander and his team and see them in action – and he was quite impressed. In their work for the Highway Situational Center of the Federal roads agency, their approach to two challenges in particular stood out.

The first is real-time monitoring of the roads, involving a host of different sensors (and so message formats) in 4 (soon to be 37) regional authorities via Pentaho, integrating it with other data sources, and reliably serving up the results to internal subsystems. FME , in the central office of road agency, collects data from all regional authorities for use in adjacent subsystems.

The second, and more spatially specific challenge is doing this based on a linear referencing system whose kilometer posts aren’t necessarily named or located predictably. 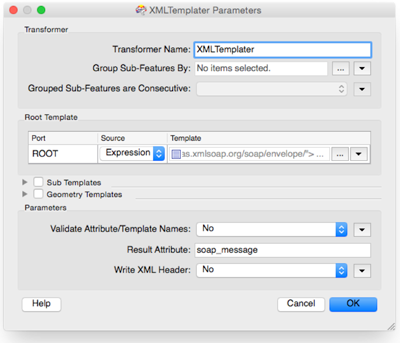 The XMLTemplater, transforming a meteorology message for SOAP using a standard template.

The Situation Center has several subsystems, each one purpose-designed for a specific area like GIS, monitoring, notifications, reporting, and so on. FME Server powers the data collection system, which Alexander’s group is responsible for, and which feeds these other systems. They communicate via SOAP protocol, and so FME’s XML handling and HTTP capabilities come into extensive use.

Data from the various sensors and services, like automated weather stations, traffic, truck weights, motion sensors, and video feeds, are pulled in at pre-determined intervals by automatically executing workspaces with FME Server’s scheduler. The data – much of it as various flavors of XML – is transformed and fed into the other monitoring systems, and used for analytics. 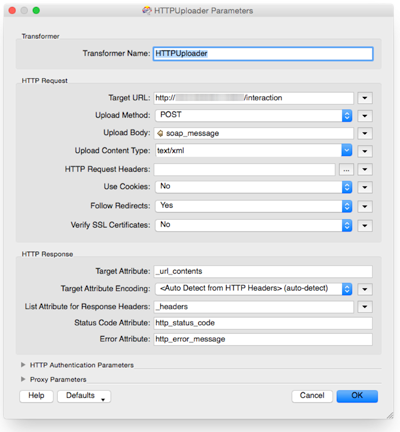 One rather unique challenge that they have to deal with revolves around the actual kilometer posts on the highways. As is common in road management, a linear referencing system is used so that the road vectors can be segmented in a multitude of ways depending on what sort of analysis is being done.

In this case, however, the physical kilometer posts are a little unpredictable.

The solution was to take the actual xy coordinates for each post (which they have in a shape file), and generate a set of virtual corresponding measures using an FME workspace.

For each road, they start by generating a set of one kilometer long measures using the MeasureGenerator, as well as finding the intersections between the road vector and the actual posts with a PointOnLineOverlayer. A bit of chopping, measure extraction, and neighbor finding then ties the points back to the appropriate (and regularly spaced) virtual kilometer measures.

A series of FeatureMergers preserves the original coordinates of the physical posts and adds the adjusted to and from measure endpoints. The resulting output data is a set of measures smart enough to interpret between the irregular names and positions of the physical markers and what is needed for LRS handling in the GIS systems. 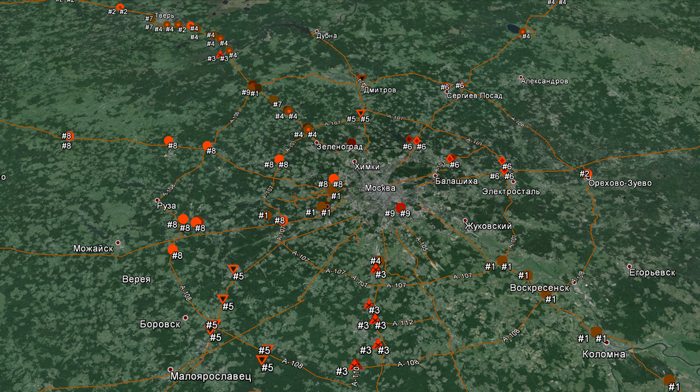 Live tracking of road equipment is just one application for real-time data.

The work Alexander has done is impressive from more than one perspective. Not many would have to deal with the linear referencing challenge he has, and building out live monitoring that will be handling 37 regional units providing data via an open-source ETL system with limited spatial capabilities (and feeding several others) definitely took some ingenuity.

“When creating situational centers, one of the key tasks is to fill them with actual data, including real-time data. In our project, we collect data from road sensors, data about road vehicles, information about road works, the indicators of roads quality and others. FME platform has proven to be an effective base platform for creation of such instruments. FME can operate as a standard ETL system. But as we know, up to 80% of the information used in state management, is spatial data. Therefore, along with the collection of data FME features very useful possibilities to interpret conditional non-spatial cartographic data such as tools of LRS. Thus FME has proved to be an effective base platform for creating situational centers for monitoring spatially distributed objects, such as road network.”   – Alexander Tarakanov

We’re looking forward to seeing what he does next!

Want to learn more about LRS or real-time with FME? Start here: