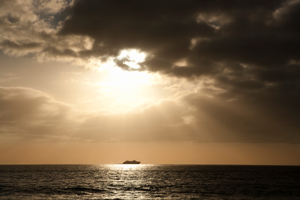 exactEarth’s global ship tracking data is collected via their satellite constellation and provided to their customers in near real time with the help of FME’s TCP/IP stream and AIS readers.

Have you ever looked out over the ocean and seen a ship disappear over the horizon? Apart from featuring prominently in tales of proving the earth is round, this phenomenon also illustrates one of the basic problems in tracking the location of vessels – around about the same time as the craft disappears from view, its line-of-sight radio transmissions can’t reach a terrestrial station either.

Unlike an aircraft, whose altitude vastly increases its transmission range, once a boat is about 50 nautical miles away from a receiving station – either on land or on another vessel – it vanishes. And that means that tracking them on the open seas that cover most of the planet is nigh impossible – until you look up to space.

The International Maritime Organization (IMO) mandates that Automatic Identification Systems (AIS) be installed on ships, and they automatically broadcast information including ship ID, position, heading, speed, weight, and more. These packets of data can be received by anyone listening – other ships, ground stations, and Canadian company exactEarth’s constellation, currently the world’s largest AIS satellite network, providing global coverage with 5 satellites (and more to be launched soon). 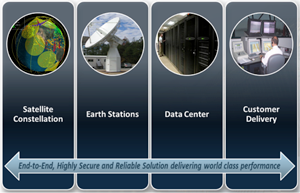 The transmissions are collected via the satellites, and make their way to a massive data center in Toronto, Canada. Which is where FME enters the picture – helping get these 5,000,000 messages a day from over 100,000 ships out to end-users in a usable format.

The inbound data arrives in a TCP/IP stream of NMEA “sentences” – a binary format, standard for marine electronics. There is a multitude of message types available within the standard, each one containing a different type of information about the vessel and its current state.

FME’s TCPIPReceiver brings the data into the workspace, and hands it off to the AIS reader, which interprets the inbound messages, depending upon which of 27 message types each one is. The type determines output routing, as you can see in this portion of the workspace (click on the image for an enlarged version). 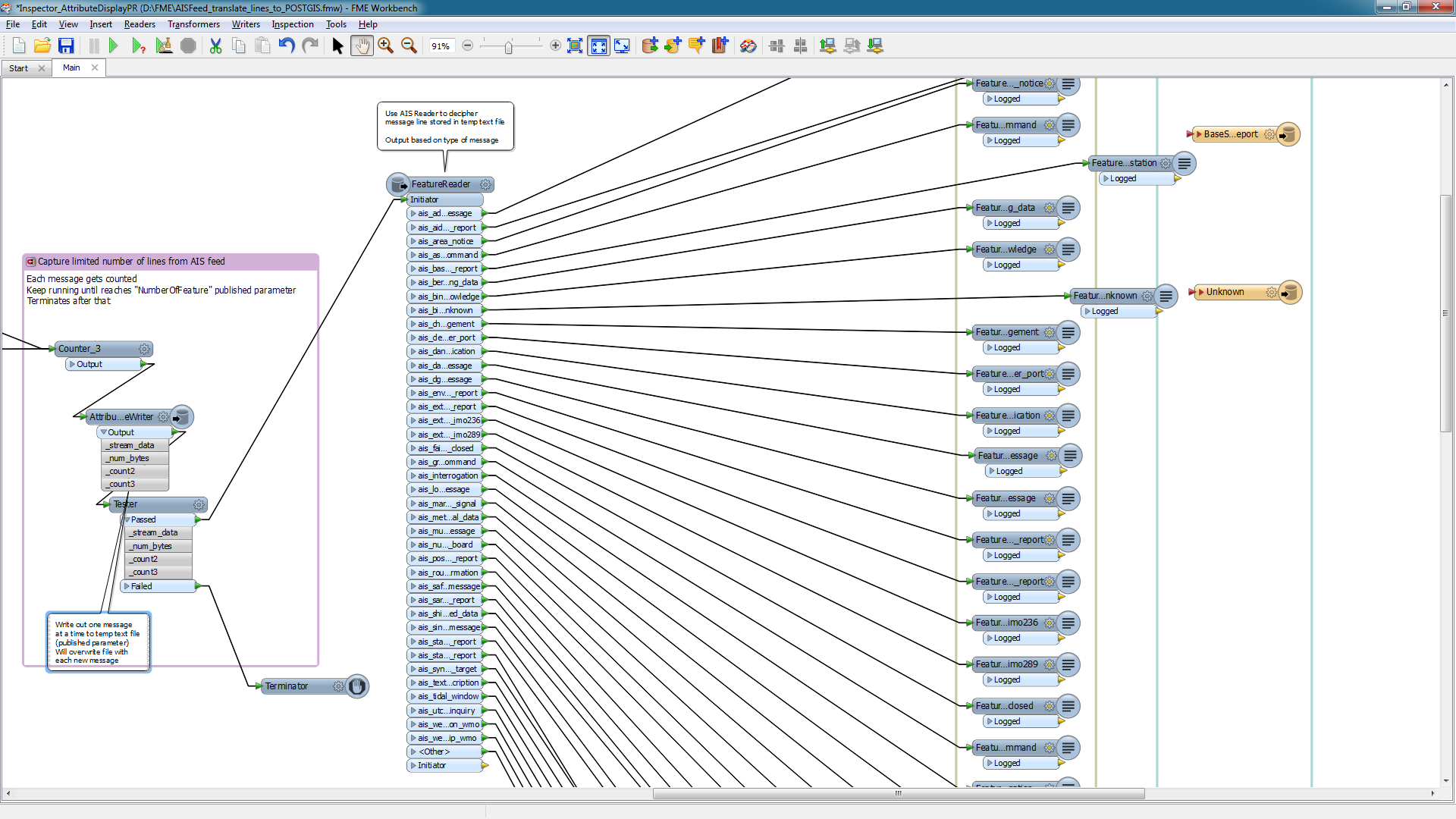 A portion of the workspace shows the filtering of 27 different NMEA message types. (Click to enlarge)

All of this happens 5,000,000 times a day – a WorkspaceRunner keeps it looping indefinitely – and as the data is written out to a number of FME-supported common formats, the end users have immediate access to the results.

The Real Benefits of Near Real Time

Having this satellite-enhanced AIS information provides all sorts of benefits in the maritime environment – and having it as quickly as possible has proven invaluable not just in simply tracking maritime traffic, but in safety, piracy monitoring, search and rescue, security, and environmental protection. As an example, if a ship’s heading and direction of travel differ by a significant amount, that could be the first indicator that they are in trouble and drifting. And if they are in a remote area, with no other vessels within radio range, satellite AIS may be the only way to accurately locate them.

A Liberian-flagged vessel is at anchor in the busy port (and home of FME!) of Vancouver, Canada. (Click to enlarge)

“We’re very proud to provide the most complete record of AIS vessel movements on a global scale”, said Taylor Nicholls, Product Manager of Geospatial Services at exactEarth. “We’ve found though with the amount of data we collect daily, it has become vital to find ways to make sense of it and distribute it as quickly as possible to aid in the critical maritime operations that our customers are involved in. FME has played a key role in helping us reach our goals with data interoperability”.

This 90-day historical track shows the exact routes taken across the Pacific. (Click to enlarge)

Handling real-time and near-real-time data from sensors like AIS systems is one the most exciting recent developments we’ve seen with FME, whether with an FME Server (or FME Cloud) platform at its core, or the approach that exactEarth has taken using only FME Desktop – which still handily deals with millions of messages a day.

Delve deeper into the technical side of real-time data handling on FMEpedia, where you can also learn more about TCP high-capacity message streaming.

And if you’d like to see more on how satellite AIS is being used, check out exactEarth’s demo site – ShipMaps.

You can also watch exactEarth’s presentation from the 2014 FME International User Conference.