So read the email I sent to Dale Lutz upon being brought into the loop on a semi-super-secret project developing in Sweden. There’s got to be a better adjective than “cool”, I thought, when writing about FME projects, and so went searching for a more literary alternative. The regular thesaurus let me down, though, and so I turned to the Urban Dictionary – which informed me that cool is “the best way to say something is neat-o, awesome, or swell”. Alrighty, then!

Now, I’m not going to say that Dale is prescient, but ever since he wrote about gaming just over a year ago on this blog, Minecraft has been popping up on my radar with increasing frequency. There was an FME project this summer in Norway, featured on our blog, closely followed by the news that the UK’s Ordnance Survey terrain data had been ported into the game. And just last week, Google’s Quantum A.I. Lab Team blogged their thoughts that Minecraft would be a great place to get “smart, creative kids excited about quantum physics”. I’ll go out on a limb and say we’re all on to something here.

Which takes us back to subject of my email, and its indisputable coolness (the project, not the email).

In a nutshell, Blockholm is an exact replica of Stockholm, in Minecraft, with one big difference – it doesn’t have a single building.

Its topography, hydrography, roads, bridges, districts, property lines, parks, and squares are all accurately represented at a scale of 1 block = 1 meter, and it’s a blank canvas waiting for the builders of the world to create a new city. 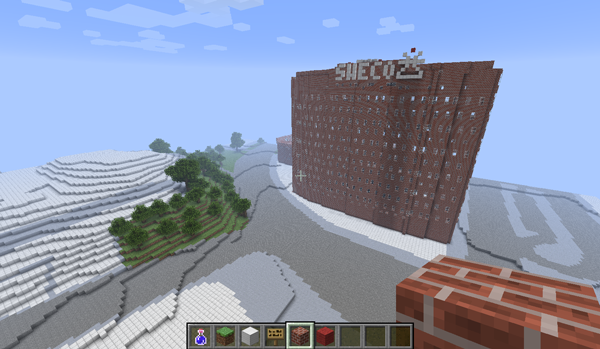 It’s been built through some rather innovative work on the part of Certified FME Professional Ulf Månsson and the team at Sweco Position AB. Ulf had been experimenting with spatial data, FME, and Minecraft, and when The Swedish Centre for Architecture and Design museum heard about it, the idea flourished into this collaboration.

Normally, this being the Safe Software blog, I would focus on the what/why/how details of FME’s involvement in the project. But in this case, it’s probably enough to say the FME, as Ulf’s tool of choice, does what it does best – assists in integrating source data with multiple formats and schemas into a homogenous dataset that ultimately ends up being Blockholm. It’s the ideas behind this project that have my imagination all fired up today.

What do you do with a building-less virtual city?

Let’s walk through what happens next. The Centre’s objective is to “illustrate and offer an active platform for architecture, design, and sustainable urban development”, and this certainly meets that objective. As of October 24th, 2013, Minecrafters worldwide can apply for a plot on the Blockholm website – and then build whatever they want. The object is not to reproduce Stockholm as it is – it’s to open up the imaginations and design talents of the world and let them loose to create a virtual New Stockholm. 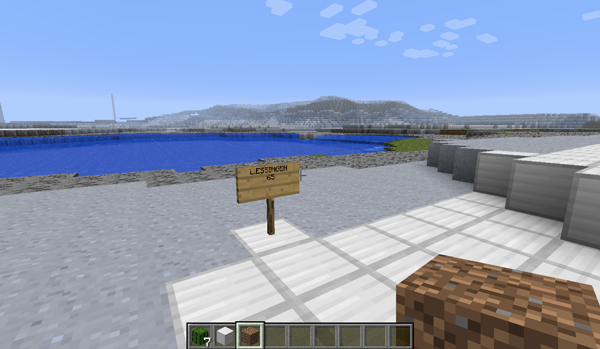 An empty lot, ready for its virtual architect to start designing, is identified by an FME-generated address marker. Björn Harrtell, PostGIS Expert at Sweco developed a plug-in for the Minecraft server that manages building permissions with a PostGIS database.

Build fantastical skyscrapers, your dream home, sculpture-filled gardens, architectural flights of fancy – once you have your plot, what you do with it is completely up to you. And – this really is the coolest part – in Spring 2014, the Centre will be selecting a number of the most imaginative constructions, and building them – for real. 1:5 scale models of the best of Blockholm will become a future exhibit at the museum.

The “why” of Blockholm is really best explained by the Centre themselves, from the website. (A slightly edited translation.)

“The project shows how the digital gaming’s creativity can be used for empowerment and citizenship in urban development and redevelopment projects nationally as well as internationally…Blockholm creates a meeting between the game’s realities and current urban planning and architecture. Minecraft is an amazing platform for creativity and we want to show the new forms of collaboration and ways to organize as the game entails. Blockholm deals with questions like: How can we change our city? Can the game be a way for each other, intergenerationally, to show what we think and what we want? Everyone is side by side, adults and children, building their dreams and ideas. All have the same conditions but with different starting points. Here we can test ideas and forms without preconditions, possible and impossible. We will thus have a new way to have a conversation with each other and with our legislators.” 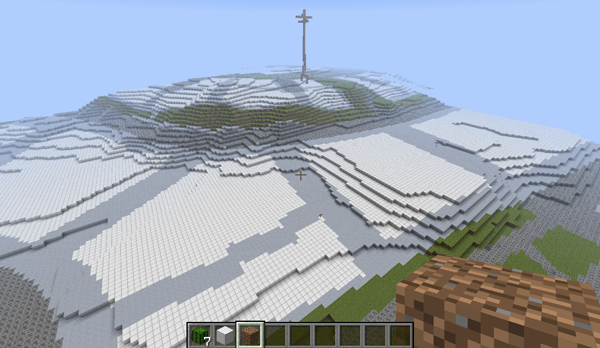 FME was used to create the accurate terrain model. This hilltop might be perfect for a podium upon which future virtual prizes in quantum physics are presented….?

Ultimately, what I see here is an incredibly innovative blend of technology and knowledge with fun and creativity. They’ve pulled together ideas that have been floating around – ideas we intuitively knew had a place somewhere – and created a forum that will teach, inform, include, and ultimately generate awareness and a sense of community around urban planning and architecture – and spatial data and concepts.

And did I mention that your construction might end up in a museum?! This is neat-o, awesome, AND swell!

Sign up for a plot, starting October 24th – at http://www.blockholm.se/ . Though the website is in Swedish, look for readily available alternate language buttons throughout the website, and start building!

Ulf and James Fee talk Minecraft and ArcGIS during a Hangout in July 2013.

2 Responses to “The Real World and Minecraft Meet in Blockholm, Sweden”