Hi FME’ers,
For your entertainment today I’ve opened up the FME Evangelist blog to my colleague Kris Majury, who recently talked to Boele Kuipers in Norway about an unusual use for FME.

Not only did he impress his children, the project turned out to have important considerations in data management.

Building Norway in Minecraft with FME

(Or, How to Impress Your Kids With Your Geospatial Skills)

Reading through the Minecraft Wiki’s list of things not to do, I can hear echoes of my mother telling me not to run with scissors. Which, naturally, I did. So I suspect that the chances of me running around in a cubic virtual world with a bucket of lava are pretty high too. Though a game, and a highly addictive one, I’m told, Minecraft has been on the mind of spatial types lately, as Dale Lutz blogged about here recently in “Game On – Why Your Tween is Poised to be the Next Geospatial Super User.” The 3D skills being developed by young gamers will be a boon to the geospatial world when they enter the workforce – which isn’t that far off.

Two more young Minecraft adepts happen to live in Stavanger, Norway, where their father, Boele Kuipers, is the Technology Coordinator at the Norwegian Mapping Authority’s Hydrographic Service. Boele was considering the gap between land and sea. Dense LiDAR-derived data was available onshore, and equally rich sonar based data was available offshore – but he had no way to look at them together. Terrain models would stop at the coast -brought up short by differences in models, projections, and such.

“It seemed an excellent experiment for FME,” says Boele, “and I remembered Dale talking about Minecraft and his kids. Mine think I’m terrible at playing it – so the only way to impress them was to build some content.” The work has a serious undertone, though – he had noticed that the Minecraft terrain was as detailed underwater as on land. It had been notoriously difficult to combine bathymetry with topography – and the end result is actually the first Norwegian combined land and sea terrain model.

Boele started with two generalized datasets – on and offshore – that were available through the Mapping Authority. With a bit of experimentation, he determined that a block size of roughly 500 by 500 meters, and height of 50 meters would be appropriate for the world he wanted to build, and fed the source data into FME to generate a combined geoTIFF of southwestern Norway with the correct projection and grid size.

The elevation and depth data was retained as a pixel value, and used to color the raster as a sort of heat map, representing those values where white was the highest elevation, and black the deepest point. After identifying sea level, he used a tool called WorldPainter to import it and apply the aesthetic touches of vegetation and glaciers, and finally recalculate it all into Minecraft blocks. The results are eerily realistic. 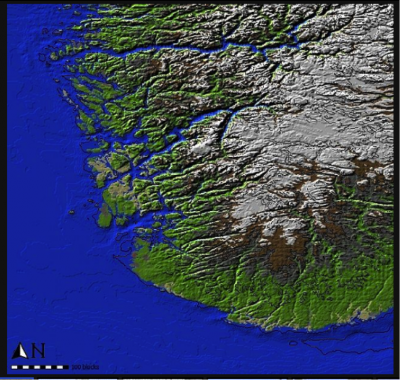 This project does have value above and beyond impressing the up-and-coming generation of geospatial specialists. As Boele tells us, “Coastal area mapping is always a challenge. Quite often, the bathymetry will start at 5 meters depth, leaving a gap at the coastline. We’re thinking about using LiDAR to capture that sliver between the two datasets. If we can fill in that gap, create a true blended dataset, that opens up great possibilities in modeling coastal habitats, making much more informed decisions about coastal use and management, fisheries, and much more. It’s a huge part of the economy.”

The Minecraft project is now officially ongoing as a tool to assist in creating a common architecture to combine land and sea. And of course, FME will be assisting in the associated challenges of processing, combining, QCing and managing these sizable source datasets. 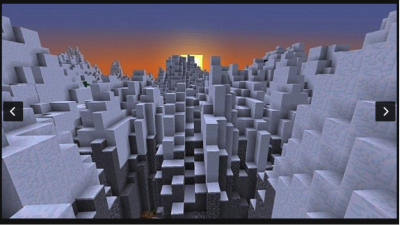 Sunrise over the Hardangervidda

I asked Boele how he sees game-oriented technologies like Minecraft fitting into the future of geospatial. “It’s a nice tool to involve young people,” he says, “and it gets them geared towards making something themselves – they’re not just a consumer. I’ve seen it with colleagues, too. It’s a middle ground to get youngsters interested in the technology and programming – but instead of ‘Hello World’, it’s `Hello REAL World’.”

You can check out Boele’s work on Planet Minecraft – he recommends using JourneyMap with it.

And remember, don’t look an Enderman straight in the face.

One response to “Building Norway in Minecraft with FME”