Hi FME’ers,
Since FME2014 beta versions are now available on our download page, I thought I’d cover – in brief – a couple of the obvious changes.

Mac and Linux
OK, this is obviously the big news and you probably know this already: FME Workbench is now available on Linux and Mac operating systems. 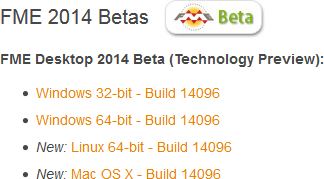 It wouldn’t be the first time I’ve heard a user say they only use Windows because of FME; so very shortly you’ll be able to switch completely (or have to find another excuse for sticking)!

New GUI
We didn’t set out to redesign the interface but, because we wanted to add new platform support, we had to change the technology that drives the Workbench canvas. So you’ll see a lot has changed in the basic appearance of FME:

We tried to keep the same look and feel but differences were inevitable. After an initial moment of surprise this design is really growing on me and I hope it will for you too. Of course, we’re tweaking things as we’re going along and the new technology does provide some additional benefits that we can make use of (more on that below).

Nulls
In a previous Evangelist post I talked about updates to our support for null values. Basically it’s been a bit of a compromise but now, in 2014, we do have nulls fully incorporated into our data model.

You can see here how reading from an Oracle database I actually get <null> as a value, rather than it being empty or missing completely. Support is there too for SQL Server, PostGIS, and Geodatabase.

Writing data allows this too, and you can set null values in various ways. Firstly we have a new NullAttributeMapper transformer: 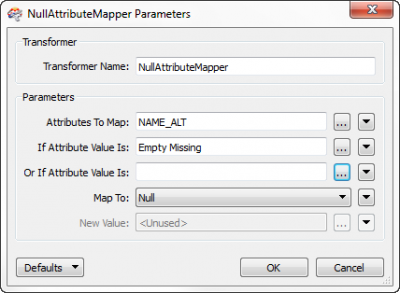 …where I can change an attribute from being empty or missing (or any other value) into a true null.

We also have updates to other transformers, such as the AttributeCreator: 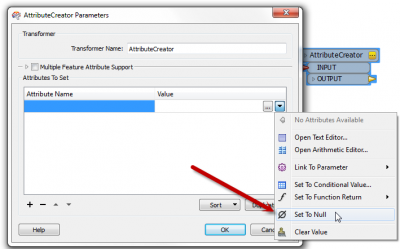 We’re continuing to work on this null support and add it to other transformers too, where appropriate.

Other Stuff
There are, of course, a bunch of other changes. In the GUI, for example, you can now select features that overlap a selection window, like so: 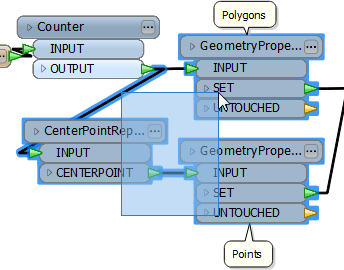 Previously you would have had to completely surround the objects with the selection window to get them. We think this is an improvement over that older behaviour (I certainly find it easier).

Another item in the What’s New file is:

…suggesting to me that we support gestures on a touch screen device (I’m guessing Windows 8).

Bookmarks change too in 2014. Now objects in a bookmark are added/removed by dragging them in/out; not by moving the bookmark over them. This means you won’t pick up objects by moving a bookmark, as you could inadvertently do in older versions. Give it a try (I can’t really illustrate the concept with a screenshot!)

Dale says that change is good… as long as it makes things better.

Don talks about the Restaurant Model, and how we strive to make both the food (FME) and the service (Support) as good as we can.

Well I guess you could say the biggest change here is in our restaurant’s decor and, like a restaurant, it should make for a more appetizing and palatable experience. So, does this decor work for you? Would you award us a three-star review? We’d really like to hear your thoughts, ideas, and – even – criticisms of FME2014.

So, give it a try and let us know what you think. 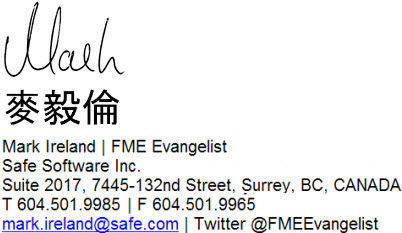