One year ago on this blog I wrote about putting LiDAR in its place with FME 2011. One year (and a whole bunch of hard work) later we’re back with FME 2012, and we’ve got LiDAR files everywhere scurrying for cover. They aren’t going to know what hit them.

In the past year we’ve been repeatedly impressed with what we’ve seen our users do with the point cloud and LiDAR support that was part of FME 2011. But as much as we’ve been impressed, we have also been challenged with the increasing data volumes and scenarios our users put before us. FME 2012 is our answer.

The first thing we did was address performance in the case of astronomically large input. So if you were using FME 2011 to clip or tile your billion point LAS files, you are going to be very pleasantly surprised when you try FME 2012. To put it in perspective, clipping or tiling moderately sized LAS files on a standard computer is about 4-5x faster in FME 2012 as compared to FME 2011 (which was already no slouch at this).

For users looking to archive or exchange LiDAR data, the incorporation of Martin Isenburg’s most excellent LASzip compression technology allows FME 2012 to really cut these files down to size. Thanks Martin for making this available for us all to use! We typically see LAZsip’ed LiDAR files being 30% the size the original LAS, and others have reported reductions down to 10% of original. If you have the need to archive or share any amount of LiDAR data, these space reductions can really begin to add up and save significant storage space. All you need to do to use this is flip on the “compression” setting of the LAS writer in FME 2012, and you’re golden. The standard LAS reader in FME 2012 can just read these as if they were LAS files to begin with.

Paul wrote about the importance of Geocentric Coordinate Systems a while back, and FME 2012 is our first release with this support. So bring on those files that store their position as a distance from the center of the earth, and we can turn them into something a bit easier to deal with on old terra firma. We can also go back the other way, taking projected or geodetic coordinates and making geocentric, which in conjunction with 3D output formats like PDF can cast your data in a whole new light.

While we’ve partially supported using FME to load Oracle Spatial Point Clouds for some time now, in FME 2012 we’ve taken it to a whole new level. Got a billion points you need loaded? We’ll load it and block it for you in under 18 hours (on a 3 year old desktop computer, on less). So if you are doing a lot of Oracle Spatial work with point clouds, you really need to check that out.

Looking forward to ArcGIS 10.1’s support of LAS files? But not so much the need to have a .lasd (LAS Dataset) file first? Don’t worry, FME 2012 is ready when ArcGIS 10.1 is and will create .lasd files at the same time as it writes out LAS files from whatever input source. Just make sure you have ArcGIS 10.1 installed, flip on the setting, and go straight into ArcCatalog to start using the results.

My personal favorite LiDAR Ninja trick is the ability to take a point cloud that has no color information on it, and overlay it into an orthophoto to produce a colorized point cloud. As more software becomes available for visualizing massive point clouds, the volumes of data collected without color can be made that much more interesting and useful by colorizing them.

We’re really looking forward to meeting you and showing off the point cloud prowess of FME 2012 on this year’s FME World Tour, so check out the dates and sign up if we’re coming to your neighbourhood. We’ve also got an FME & LiDAR focused webinar coming up in March (actually, two in one day – if you like the first showing you can tune in again for the second!) where we’ll show you how to do all this and more. So check one or more of these opportunites out – and I’m sure you’ll agree that using FME to tame the LiDAR beast is fast, productive, and, dare I say, fun. 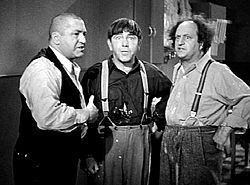 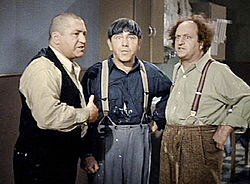 We wouldn’t endorse using FME 2012 to colorize the Three Stooges, but if you had a point cloud and an ortho, we wouldn’t stop you either.

8 Responses to “Beating LiDAR into Submission with FME 2012”