Today marks one month since we officially released FME 2010. One of the most interesting things that any software product company has to cope with is THE RELEASE. Software by its very nature is not something you can immediately look at and assess whether or not it’s done. 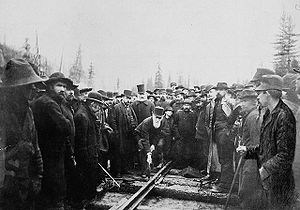 If you’re building, say, a railway across Canada, you know when you’re done when the last spike is pounded in. (Although, according to Wikipedia, trains didn’t roll on it for another seven months – presumably they had documentation or training materials to finish up).

But if you’re building software, there are always more features, more refinement, more optimization, more customer requests, and more external constraints pouring in that, if left unguarded would cause the release to never happen.

At Safe, we’re now on an annual release cycle, so we’re starting to see some patterns…and so, with apologies to Kübler Ross and the Ferengi , I present the 5 Stages of an FME Release.

As the process begins (while the previous release is dying down), we enter:

Stage 1: Naïve Idealism. A period of brainstorming and planning.
“Wouldn’t it be awesome if we could…” “Customers are asking for…” “We could sell more if we…” “Let’s finally fix…”. A happy carefree fun filled stage. The “Yes We Can” phase.

In a few months, work begins to bear fruit and as some early projects get delivered, we find:

The summer comes and goes, and everyone is back at it in the fall, just in time for:

Stage 3: Stark Realism. A time of cutting and cramming.
“Oops, we can’t quite get this part done” “Let’s sneak this last feature in quickly while no one is looking” “There’s always going to be another release”

The software is nearly done, and deadlines (and Christmas holidays looming), we realize we’re in:

Stage 4: Culmination.
“Wow, I’m glad we caught that one” “How did no one notice this for the past 6 months” “What? Dale and Don want to add another format AT THIS STAGE IN THE GAME”

Christmas comes, the DVD goes off to the plant, and the marketing, documentation, and training folks stick pins in their Dale and Don bobble heads as they toil away to finish up their post-DVD deliverables in preparation for the official launch, which heralds the arrive of:

Stage 5: Dénouement:
“Our best release ever” “We’re proud of what we’ve created” “Customers are going to love this” (Well, maybe not that last one)

This stage includes numerous webinars, interviews (like this, this, this, and this), and road trips, and this activity lasts for several months, just as the next release moves well into its own Stage 2, and the tension builds about not talking about the next release while the current release is still fresh to all of our customers.

In these days, with few people wanting a CD or DVD, why bother with a release at all? Why not have continuous builds available all the time so customers can just help themselves to whatever the latest and greatest is (oh yeah, we do that already). Yet, there is something special that comes with each release: a seal of approval, a great excuse for a party, and something to rally around. Perhaps even more important, without the discipline the release and its stages enforce, we could just end up like the much maligned Duke Nukem Forever in more ways than one.

As we continue to make the most of Stage 5, I look forward to meeting with many of you and speaking with you about FME 2010 (perhaps we’ll meet on the FME Odyssey…)

6 Responses to “The 5 Stages of an FME Release”