Hi FME’ers,
It’s that day of the year again, when our latest version of FME is officially released, or in this case perhaps I should say ‘launched’… 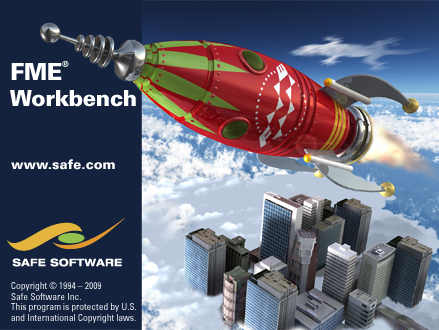 So Happy Birthday, FME2010. Hey, I love our splashscreens. There are so many hidden meanings for those in the know… just like the Toblerone bear! If you want to check out the image in more detail then Help > About FME is what you need.

Anyway, over the next few weeks I’ll be making a series of posts highlighting different aspects of FME, or of spatial data processing, which I think are particularly enhanced by FME2010. I hope to include special postings on new transformers, Workbench GUI updates, FME Server, PDF writing, new KML functionality, and maybe metadata too.

However, for this post I just wanted to highlight my personal top-10 list of favourite functionality for 2010, perhaps slipping in a couple of items which already existed but few people know about.

10) New Transformer: AttributeRangeMapper
I’d lobbied for this a while ago and of course now I don’t have a particular use for it! I hope you will. Basically it’s like the ValueMapper but for ranges of values. It’s a good way to classify data before using it in your GIS for cartographic symbolisation. The new AttributeRangeFilter is similar and worthwhile mentioning as being one of the first FME transformers where you can manually rename the output ports! 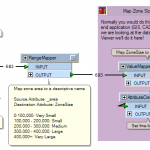 Above: In this example the AttributeRangeMapper is being used to map polygon size to colour (click thumbnail to enlarge)

9) FME Installer: Remember installation path
Maybe this was a small (and, in hindsight, obvious fix) but I like it. It saves me a couple of clicks and keypresses. By remembering the previous install path, and using it for subsequent installations, I can overwrite one beta build with the next quickly and easily. And don’t forget you can now check for updated builds by using Help > Check for Updates or by subscribing to the FMEBetaBuilder feed on Twitter or via RSS.

8) New Functionality: Quick Add
We normally have one standout update to the Workbench GUI in each release, and for FME2010 this is it. Simply start typing within Workbench and a list of matching transformers pops up. It means I can close the Transformer Gallery for all but the rarest occasion. 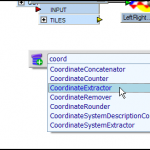 Above: Using Quick-Add to add a CoordinateExtractor transformer.

7) Format Update: DGN Custom Linestyles
As the title says, this is support for Custom Linestyles in MicroStation DGN format. I rarely get involved in any format to the depth where this sort of update is important to me; but when it’s been requested by so many customers, how can it not be a great thing?

6) Funky Tip: Double-Click Mouse Wheel
Open a workspace. Now double-click the mouse wheel. See what happened? The view zoomed in/out to the default (100%) scale. I use this all the time to make sure I take screenshots at the same resolution, but it also helps when I just want to see things in their natural perspective. Not new for 2010, but I only just found out about it in the past year and I doubt many folk know about it.

5) FME Server: Ability to Select Streaming Writer
I’d been stuck before when creating a server workspace (actually for the UC2009 FME Idol) because I wanted to write data to a database but also stream a response to the translation out to a HTML page. At that point it just wasn’t possible because there was no way to choose which writer to stream.

With the 2010 release I can now choose which writer I want to stream data to, so it’s possible to write to one format (eg the database) while streaming/downloading to another (eg KML, HTML, etc) simultaneously. 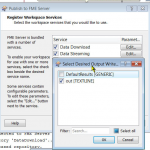 Above: The choice of which writer to stream is set when the workspace is published.

4) New Functionality: Choice with Alias
I’ve written about this previously, so won’t elaborate except to say it’s a Published Parameter function that I’m convinced is vital for delivering dynamic workspaces to an end user. 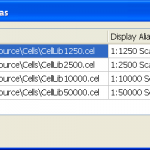 Above: Choice with Alias is basically a way of creating a user prompt which points to an underlying value

3) WorkspaceRunner: New ‘Name from Attribute’ Function
I haven’t tried this yet, although I’ve been meaning to create a demo for ages. By allowing the WorkspaceRunner transformer to run a workspace defined from an attribute I can combine it with the Directory and File Pathnames format to read a whole list of workspaces from a directory and then run them. I see this as a useful way to automate batch processing. 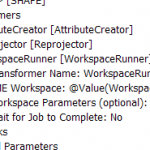 Above: At the moment you have to do this by opening the transformer in the Navigator and entering @Value(attrname)

2) Data Integration
Something else I’ve already covered. This isn’t a specific function, but it’s what really excites me about FME2010: the way that all FME’s 2d, 3d, and raster functionality is coming together to operate in unison. Syzygy is the word I think I’m looking for, though it’s not a word our marketing team are likely to use (“Buy FME: It’s Syzygial”)!

As an example I can turn a vector DEM into a 3D surface, drape a raster over that surface, rasterize some 2D vector features, and write the whole lot into a Geospatial or 3D PDF. Kudos to the developers who helped make all this possible. 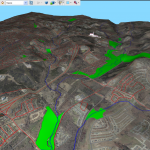 Above: When you do the process described above, this is what you get. Nice, eh?!

1) New Format: Generic Reader
Sometimes new functionality adds capabilities neither the designer or developer intended, and this is one case. More embarassingly it was a member of the sales team who brought it to our attention. We’d intended the Generic Reader to be a way of reading a number of datasets without knowing what format they were. The unintended side-effect is being able to read any number of FORMATS simultaneously; i.e. a bunch of files of mixed format through a single reader! For me this story is almost as good as the functionality itself. It keeps us geeks humble to have a non-geek point out our oversights. 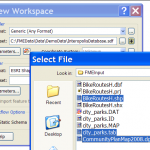 Above: Look! I’m reading MapInfo, Shape AND MicroStation datasets all at once! 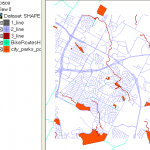 …and here’s the output to prove it works!

0) New Concept: The FME Store
OK I’m cheating, both because this is the 11th item on my top-10 list, but also because I’m not even sure this will appear until 2011. But you won’t know about this yet and I couldn’t resist giving what I think is known as a ‘teaser’.

For a long time you’ve been able to password-protect a workspace/transformer/format; so what do you think the transformer below does? And how might it be combined with the “Download from fmepedia” option in 2010? 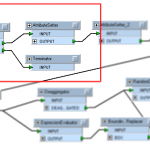 Above: In the words of the immortal Rolf Harris, can you tell what it is yet?

OK. So now FME2010 is launched and your CD/DVD is in the mail (if you have a maintenance contract) or you can download it from www.safe.com/downloads

As with previous years, we’re still making minor fixes and updates, and the downloadable build on the web site will include these as they are published.

So, go ahead and install and have fun!