A couple weeks ago I had the opportunity to attend the FOSS4G conference in Sydney Australia. The FOSS4G conferences are a tremendous gathering point of spatial expertise, and it was fantastic to hang around and learn from so many giants in our industry. I particularly enjoyed the evening of 5 minute talks at Ignite Spatial – they are all up on YouTube (for anyone doing business presentations, “Pie Charts are Evil” really is a must watch).

I was asked to do a 5 minute lightning talk the next day at the FOSS4G. During my talk, one thing happened that I don’t think has ever happened to me before. Spontaneous applause. Right in the middle. And not because of an FME demo! What did I do to earn it? I simply suggested that for all the problems we have in the world of spatial, arguing about whether the x coordinate gets written out before the y coordinate (or the other way around) in a textual representation of a point in space, seems like about the last thing we should be doing. It was clear to me that this struck a nerve in the group, as many there have had to deal with problems in GML files that are produced with a Coordinate Reference System definition that states a “y,x” coordinate order, but inside have them as “x,y” (or “lat,long” vs “long,lat”) with the client software honouring the definition order and resulting in a flipped map.

Just a couple of days ago I was directed to a blog post on standards from the health information world which has plenty of wisdom for those of us in the spatial industry. It is important to keep things simple, to make choices that are easy for implementers and that make it easy for the standard to be used and adopted. I really applaud the work of the GeoJSON group 18 months ago in defining that “standard”. The group was not officially ordained by any organization, but they did a great job. See this post for an insight into how the coordinate order issue was initially approached and then after much discussion wound up with point coordinates in “x, y” order (longitude, latitude for geographic coordinates). Period. This is much less complex and its lower barriers of entry means it gets used.

To paraphrase Glen Bell from his “Pie Charts Are Evil” talk: “brothers and sisters, there is evil in this world, and it is … complexity”. Here’s to simplicity in future spatial standards! 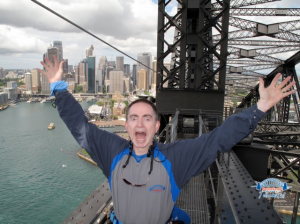 Here's me celebrating the simplicity of the GeoJSON standard in Australia.

2 Responses to “Simplicity with Geospatial Standards”