New in FME this week is a DonutBridgeBuilder transformer – that works out a route among the holes or islands on a donut polygon.

Dmitri created a short demo workspace for this which you can find on fmepedia at: http://www.fmepedia.com/index.php/DonutBridgeBuilder_Example 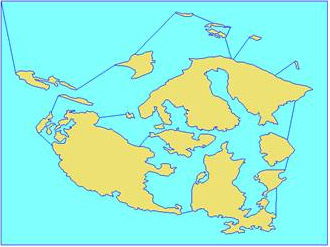 One common complaint among users is that the formats gallery dialog contains a large amount of information, but defaults to a small size in which most columns are not fully displayed. As you would imagine, it becomes tedious having to resize the dialog every time you use it.

An update this week didn’t simply make the gallery larger – because that might cause problems for users with small displays – but what it does is store the size details for use next time the dialog is opened. Therefore a user needs only to resize the dialog once and it will always be that size when opened.

Above: Before the default window was small, but now I can see every field.

The ecstatic response from one of the satisfied users was “Hallelujah”!

Picking apart Dale and Dmitri’s serpentine numberer recently (www.fmepedia.com/index.php/SerpentineNumberer) I found they had used a funky programmer’s short-cut to avoid using a bunch of testers in the workspace.

The shortcut was to use a C language conditional operator in the expression to both test and assign a value all in one.

Because I think it’s a useful tip for more than just the programmers amongst us, I put some examples up on fmepedia under: 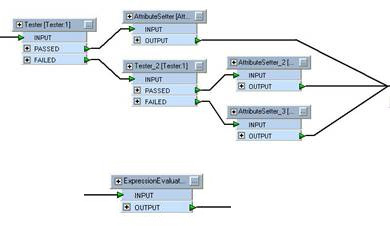 NB: As an example of how many times a new page gets viewed when advertised on the user group, this example got 60 hits in the first 24 hours.

Aaron Koning came up with a custom format to read geo-coded photos from a Ricoh GPS camera.

The really interesting thing is that Ricoh seem to be targeting this specifically at GIS users, and a lot of the camera resellers are also GIS resellers or consultants.

It might be worth someone going through the list to see if any are also FME users/resellers so we can be sure to pass this on.

A user on the FMETalk group bemoaned the fact that he couldn’t turn off the new transformer drag-drop-insert behaviour (which he needed to do because when zoomed out to the full workspace extent the links were too small to properly make out, even when highlighted).

By the time he checked back into the group we’d already made the fix for him (build 5138+).

His response… “Wow! One day out of the office and I come back to this. That’s what I call a response. Thanks to all the Safe guys.”

Designed for a user on the FMETalk group, this custom transformer thins out a cloud of points so that no two points are within x distance of each other (x being a user defined number). The method is OK (Mark S thinks a triangulation method would work more efficiently) but my real puzzle is that I sometimes get incorrect results unless a stick a NULL writer into the workspace!

Anyway it’s a good way of thinning out sample points (eg a DEM) and even if you don’t have a use for that, it’s a good example of using custom transformers, loops, lists and global variables.